Greetings and welcome to the 2016 season, it looks like it’s going to be a really special year.

Within the first week we have had great sightings of the Kaingo wild dog pack and excellent lion action. The Nsefu (13) pride crossed and killed a waterbuck just behind Kaingo on Wed 4am. The following morning there were lions running all through camp at 5.30am with some yearlings ending up in front of the souvenir shop, hiding from 2 of the new Mwamba pride males who had chased them off their turf. 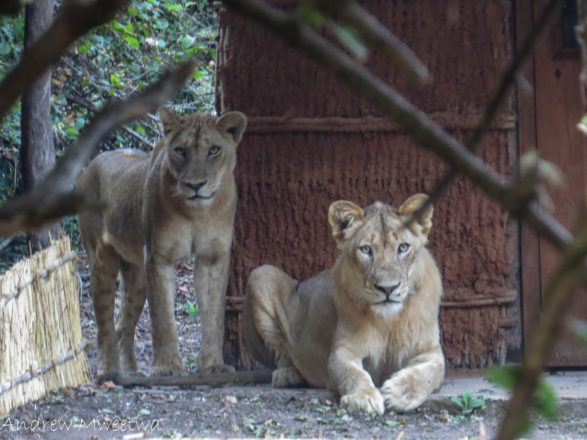 This led to the Nsefu pride’s own shared males (who also cover the Hollywood pride)Tangua and Nyuma to roar in defense and a standoff across the river developed with loud calling, marking and bluffed river crossings between the two teams. 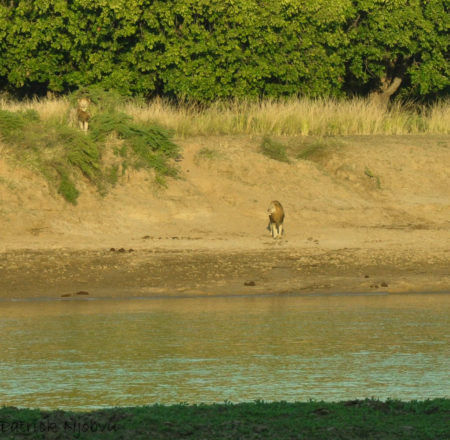 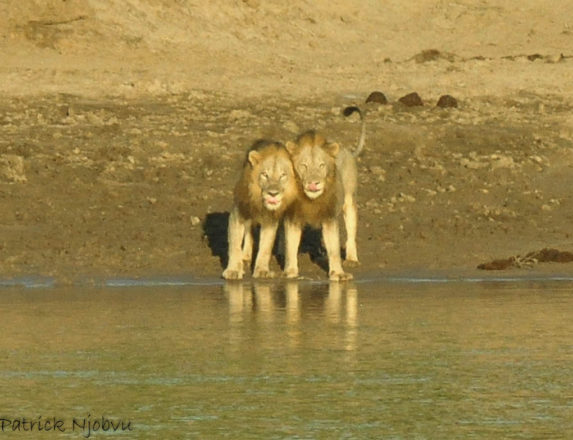 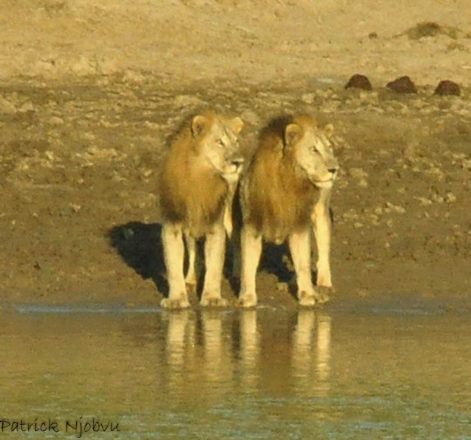 Eventually another young strong male (not “Knobby”) came to join the new Mwamba guys on our side bringing the total to 3 new males for the greater Mwamba pride. 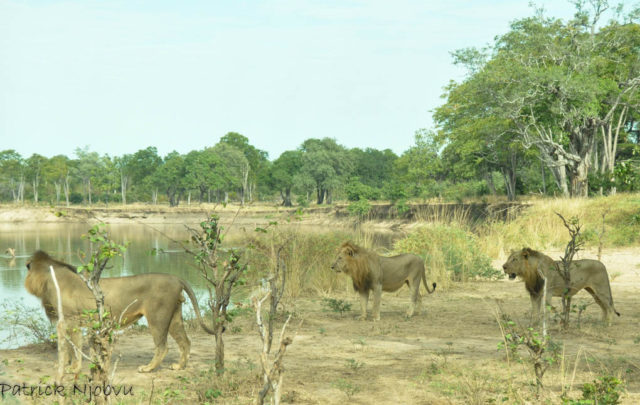 The Hollywoods retreated and went north to call back their girls to cross back again to Nsefu.

May/June is a spectacular time of year in terms of perfect weather, full lagoons and lush vegetation. An early tea huddled around the pre-game drive fire, listening to the calls of the wild amid dawn birdsong chorus, is my best time of day. It is very exciting for us to get to see if there have been any changes to the predators in terms of cubs, pups and takeovers.

Garth, Liz (General Managers based at Kaingo) and Ruth (Executive Chef) have been joined by Agata(front of house) and Craig and Lyndie at Mwamba. All the guides are rearing to go. You can find full biographies on our staff members here.

Many thanks to Mark Smith from the Copperbelt who volunteered to help us during the camp building phase.

Having just opened Kaingo last week I am breathing a little easier, but there are still a few days before we open Mwamba Bush Camp, so I’m going to hand over to Jules and get back to camp-building.

We look forward to seeing you or keeping in touch in 2016!
Salani Bwino,

My 2016 season kicked off on the 2nd of May in Cape Town with the We Are Africa trade show. There was such a positive feeling amongst all exhibitors and travel agents about the future of tourism in Africa this year and beyond. 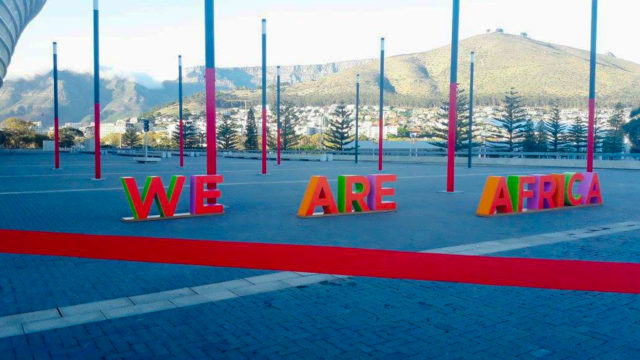 One of my meetings at the show was with Allison Busacca, the founding member of the BBC.com features team; and editor of BBC.com/Travel. In 2015 she ran a campaign for the BBC called 50 reasons to #lovetheworld that inspired me to develop our #nourishedbynature campaign.

There is so much in the news that can make us feel despondent about the demise of the natural world. Between climate change, poaching, species extinctions and man’s degradation of our natural environment it’s sometimes hard to remember the beauty and the wonder. The part of our “job” that Derek and I are most passionate about is the opportunity we have to bring people into experience with nature.  Our aim, particularly with our wildlife hides where you can simply sit and be with the wildlife, is that our guests leave remembering their sense of wonder for the natural world. Our goal is that you feel nourished by the incredible wild beauty of the environment and wildlife we are blessed to have in our care.

`Because spending any time in this most wild and special place leaves you forever changed; the drum of nature’s heart will always beat within you…’ 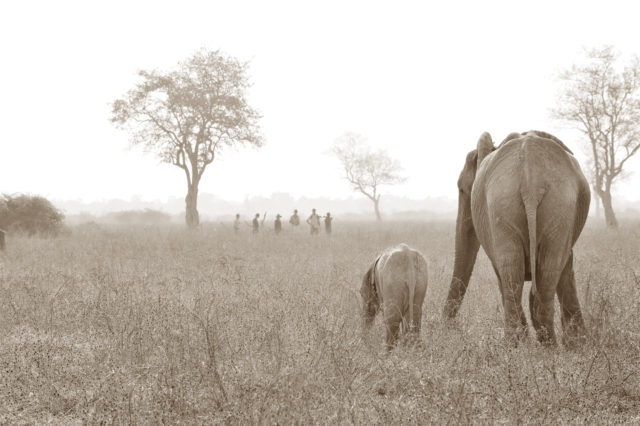 #nourishedbynature  began this week and already we have some great submissions. If you have some magical images or video that you took whilst on safari with us that you’d like to share, please send them, along with a short “because” sentence, which describes how that experience made you feel #nourishedbynature . You can send these to me on Juliet@kaingo.com cc’ing camp@kaingo.com  *Please only send links to videos, not video files as our “bush internet” will struggle to cope.

You can submit as many images and videos along with unique “because” sentences as you like. Each of them will be shared on our various social media platforms, and at the end of the year we will showcase the best 50 of the season in a very special collection. You can see the first submissions here.

And with that, I will now hand you over to the team.

The late rains that the valley received in April, were kind enough to abate days prior to our reentry into the park. So we’re back and Kaingo Camp is up and running, now all efforts have turned  to readying Mwamba Bushcamp for its opening on June 1st.

Derek led the reopening team in as he has for the past 24 years, cutting their ways through the bush’s reclamation of the roads. With the tractor leading the way they struggled through the thickened brush and slowly flowing streams. They reached and forded the deep, muddy Kamima stream and then were once again under the stately trees of Kaingo Camp.

Liz and Garth made their ways back into camp on April 29th kindly escorted by Sylvester, travelling over the winding trail that Derek and his team had reopened, as there was still too much water covering the more direct route. The journey into camp was a slow one as Mother Nature had reclaimed last year’s roads as her own.

`We are always surprised on our arrival back, at the lushness of the camp, unrecognizable to the thirsty, dusty camp we had left 6 months earlier. Arriving back to camp always brings with it a sense of excitement! When we left last season there was so much drama unfolding, that we knew we would have a lot to catch up on in our first few days returned. The silt-laden, slow-flowing Luangwa was still bank to bank in front of Kaingo, its surface dotted with hippos and large crocodiles. Then to our delight the tiny head of a new-born hippo bobbed into view alongside its mother. Welcome little one, we’re back.’ 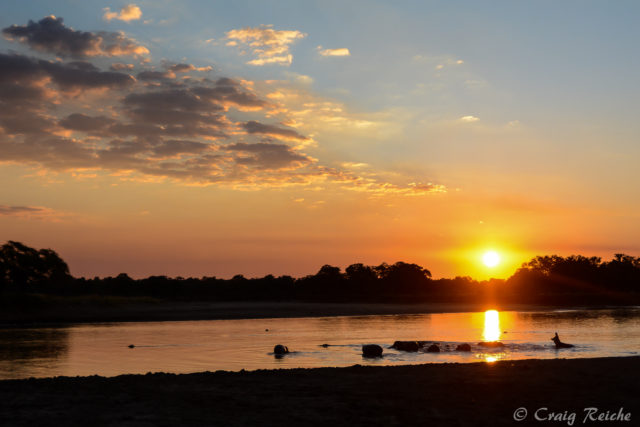 Lyndie and Craig joined us on the 10th of May, chomping at the bit to get out and stake their claim to Mwamba Bushcamp.

`Arriving on our first day at Mwamba Bush Camp to start the season for 2016, it was amazing to see how nature had reclaimed the area where the camp had stood just 6 months previously. Where once a magnificent African Ebony Tree towered over our Chitenje area, a massive horizontal branch had collapsed under the weight of a Strangler Fig and Python Vines. We could see that our work would be cut out for us this season! Before the work could start on the camp, we needed to begin the mammoth task of removing the Ebony branch. 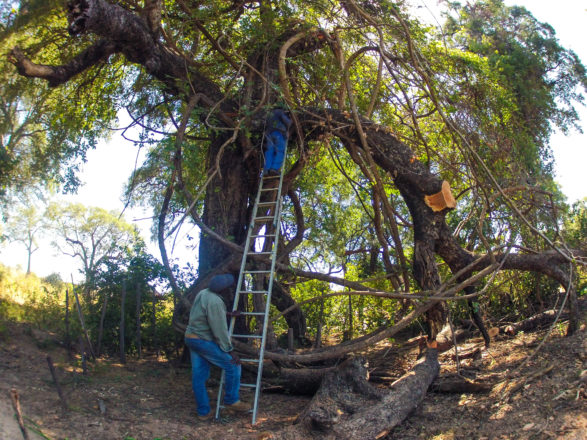 This took us about 3 days, with the help of 10 people and Derek leading the way, we slowly dismembered the massive bough, whilst carefully protecting the ancient python vine which has held our bar for the past 16 years, removing the pieces to clear a space for our dining area. 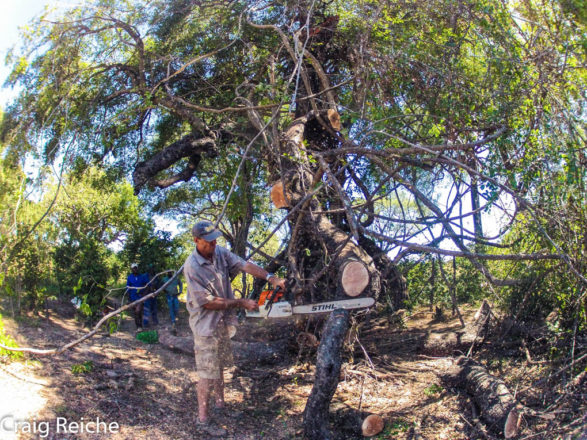 With the main area clear we set about getting the camp together. We decided that this year we would have two different dining venues as we were now lacking shade in our old dining area. Our new brunch venue will be moved down to the banks of the Mwamba River under a lovely Sausage Tree and our dinner venue will take place in our Chitenje Area under the starlit African Skies.’

Mars and Saturn dominate the constellation Scorpius, dimly made out against the awesome backdrop of the Milky Way and Antares struggles to live up to its name as the `rival of Mars’. 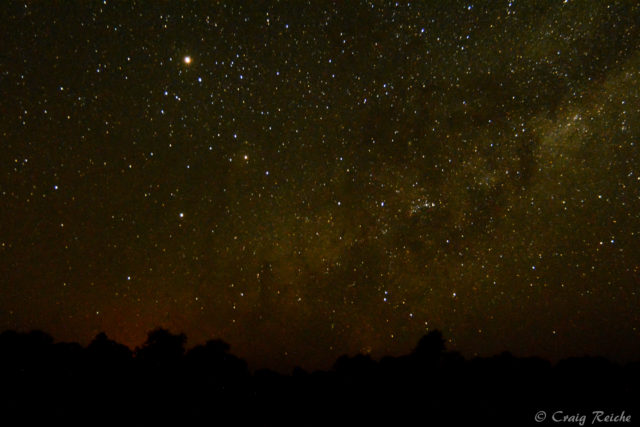 Ruth returned midway through May and immediately set about restoring order in the Camp kitchen.

`For this season we have an updated menu, featuring some of our favourites from last year and and lots of new temptations! Rest assured, the Kaingo and Mwamba teams have been busy product testing! The menu is filled with wonderful fresh produce from our vegetable plot: from juicy grapefruits and delicious papaya, crisp-leafed lettuce, aromatic herbs and a bountiful supply of fresh eggs from our chickens. In addition to all this we will be offering a low-carb/sugar-light menu, as we have noticed in recent years that a growing number of guests request a `lighter’ option. We can now offer you a choice of traditional safari fare, safari-light (smaller portions), and low-carb/sugar-light or “Banting” as it is known in Southern Africa. Bon Appétit.

Some elements of the exciting episode of conflict between the lions as described by Derek above, were captured by Patrick and his guests and here are some more photos of the newer participants: 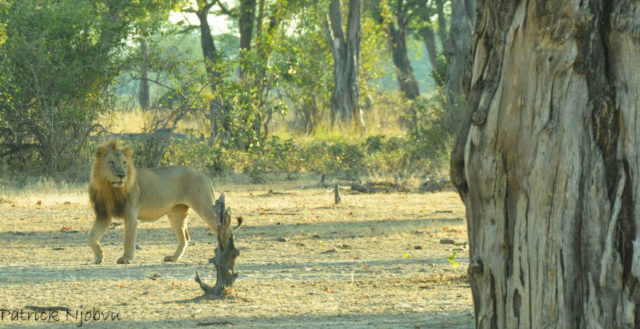 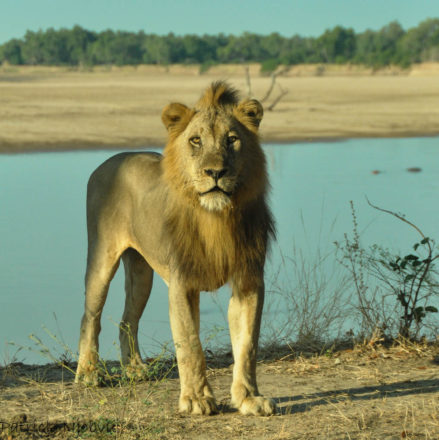 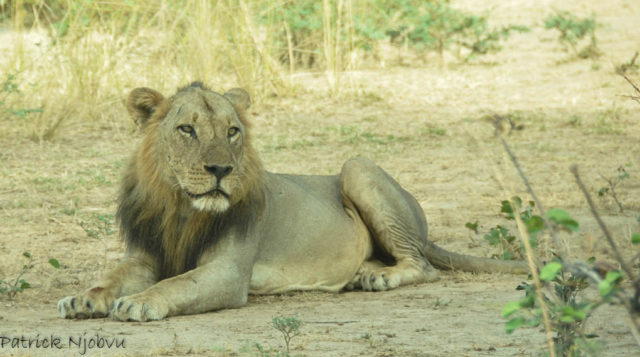 Staying away from the adult males above was nerve-racking enough for young lions, but then to be surrounded by humans must have been very unsettling, causing one young male to take his frustrations out on a cardboard box. 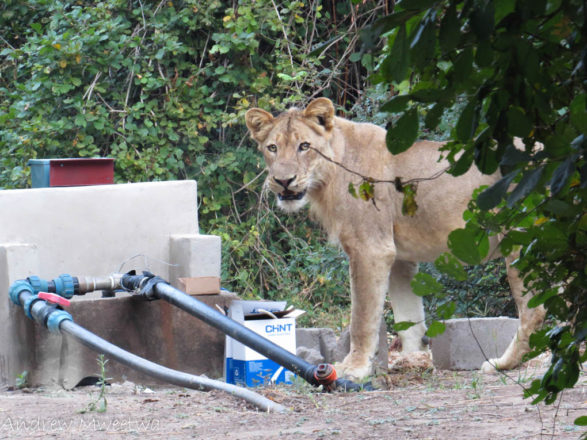 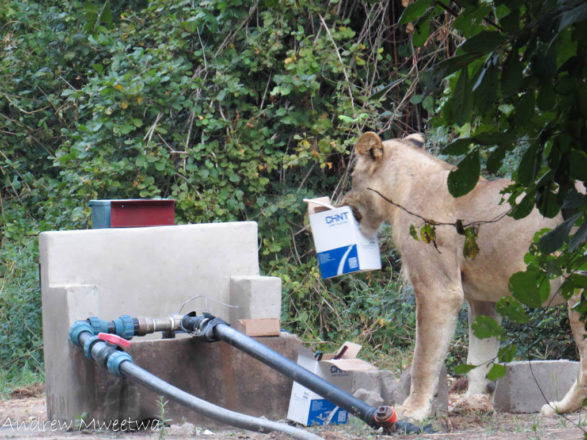 Andrew Mweetwa and his guests had the first view of our gorgeous Chiphadzuwa: 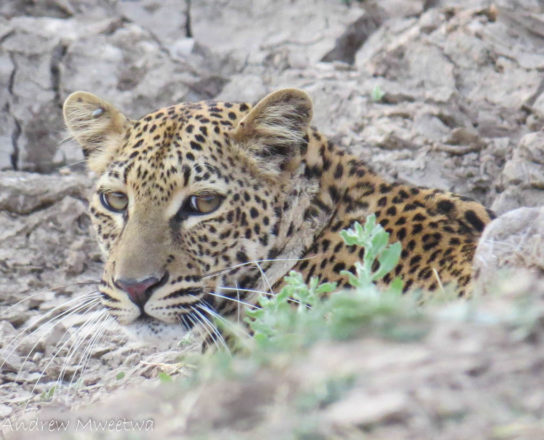 And Patrick also observed something profoundly interesting and unfortunately current in these times of the horrible onslaught on our wildlife. A bull elephant seeming to shield a young (almost 3 year old) female elephant and she, seeming to lean close to the male, drawing comfort from his presence. An unusual sighting, in that adult male elephants play no part in the rearing and education of young elephants, most especially the females. So we hope that she will soon be reunited with her mother and the rest of the family unit for she has much to learn that this male cannot teach her.

Of course we will continue to feature our guests’ pictures via our website, newsletters and on our Facebook page, so make sure to send us your best shots to info@kaingo.com.

All our newsletters are on our website for you to go back to. If you have missed any, this is a good time to go back and read them, and have a look at the amazing photographs they contain. View them here.

And if you stayed with us in 2015 and haven’t had a chance yet – please do post your review on TripAdvisor here for Kaingo and here for Mwamba, thank you in advance!