The closed season is flying by with only a few months until we open again for our 2015 season. We are in the process of making preparations to head back into the park for camp building. Excitement for the up and coming season is growing amongst us all here at Shenton Safaris.

As I’m sure most of you are aware Kaingo and Mwamba are open from the 20th May through to the 31st October when we close and at the end of every season we have to pack up vacating the park once the rains arrive as the roads to our camps become impassable. However half way through every rainy season Derek makes a trip up to camp by boat to have a check on the camps making sure things have not floated away down the Luangwa! Here is what he had to say about his latest trip:

A couple of weeks ago I visited Kaingo by boat. The Luangwa river was reasonably high – high enough to be able to explore its tributaries. 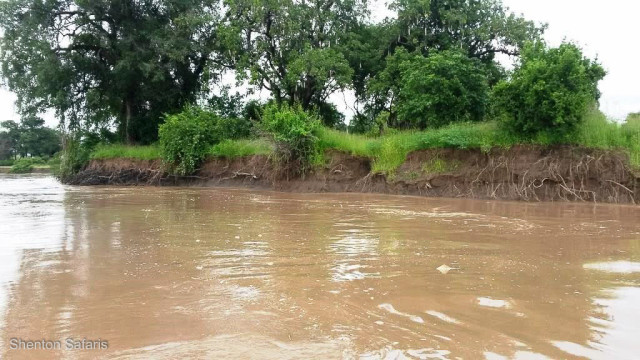 View of here the Kaingo Hippo hide is normally

The rains came so late this year that wildlife was subjected to severe stress from malnutrition and dehydration. All herbivores were affected but the larger mammals such as buffalo, elephant and hippo suffered the most. By the end of the dry season the Luangwa river was the only source of water, forcing game to concentrate along the five kilometre strip either side of the river which put even more pressure on the grasslands and riverine forests. Moving continually between water and grass often in temperatures of 40 plus (in the shade) was visibly draining and often too much for the young and old, the weak and the wary. It is normal for some species to drop their calves at this time of year in order to maximise the imminent green season flush. But this year the rains were late by two months. 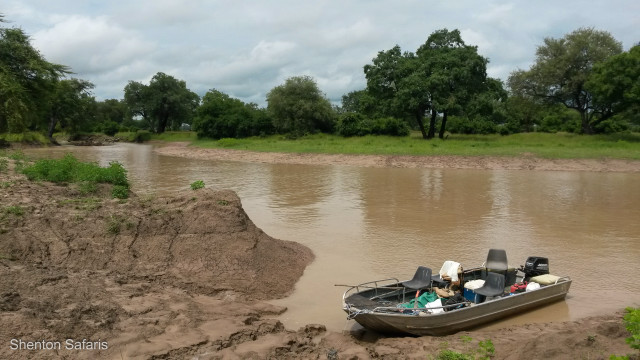 Boating up the Mwamba 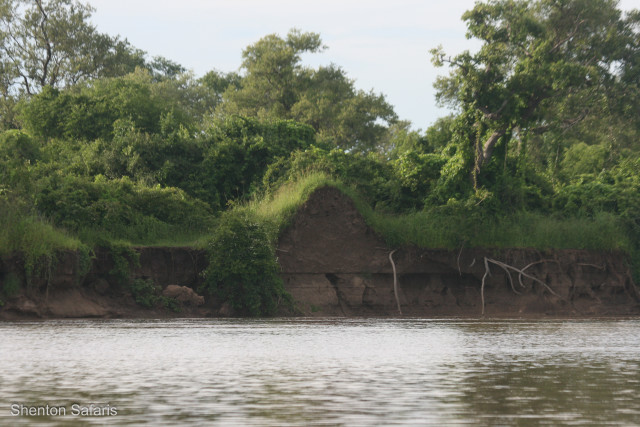 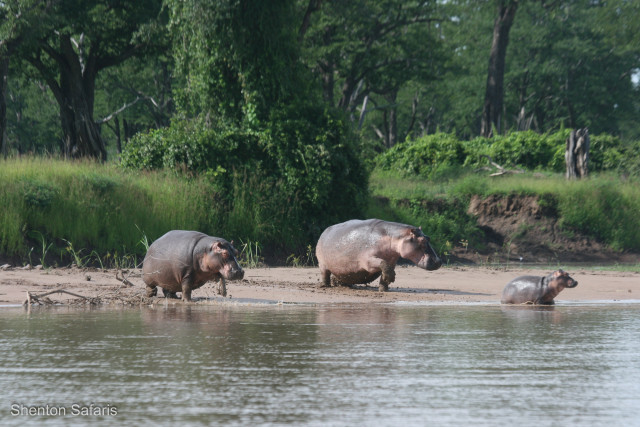 Nature is however always resilient and growth was immediate after the first big storms. Only seven weeks after the rains had started (around the New Year), and the valley had changed from the scorched earth desert of November/December to a luxuriantly green Eden . By then most of the animals had spread out far and wide to utilize the plains and sweet grasslands which are dotted with inland water-holes and lagoons, preferring to keep away from the muddy cotton soils along the river. Lagoons were bursting with life and the seasonal rivers and streams such as the Mwamba had been flushed out and were flowing with purpose. It was great to see the impala calves, young survivors of the drought full of life and joy. 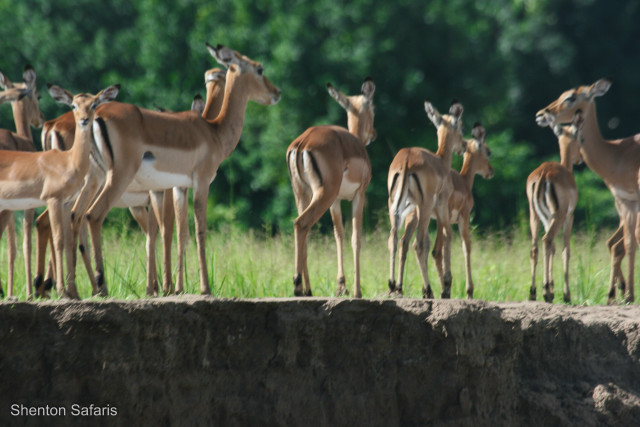 Impala on the bank 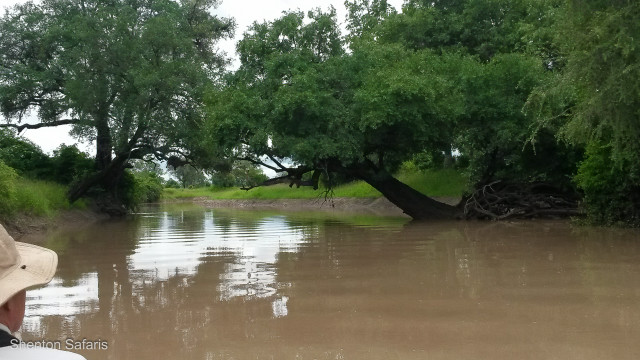 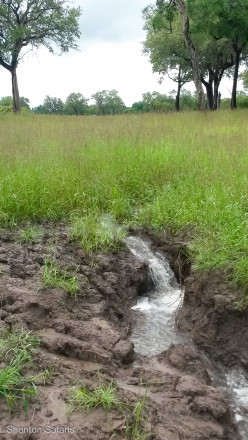 Kaingo is well looked after by our three watchmen over the rainy season, RB, Haisha and Mr Sakala. Their job includes discouraging termites that might try and demolish any timber and poles in camp aswell as report any poaching activity to the South Luangwa Conservation Society anti-poaching units. Spending six months over the rains deep in the bush requires a special kind of commitment. There were plenty of smiles from the guys at the sight of our boat coming in laden with fresh supplies. 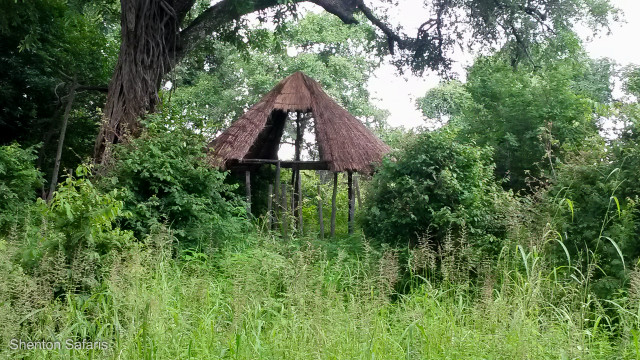 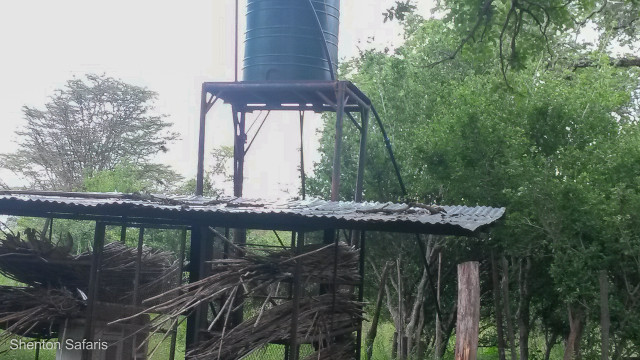 After settling in at the camp we set off up the Mwamba river to see how the bush camp was fairing. The photos tell the story – basically nature takes over. One can barely recognise any sign of the thriving dry season safari camp located under those huge ebony trees. The annual floods cause us to close camp and relocate but the animals return and take it all back. The hippo pods from the hippo hide just up from Kaingo Camp all move into the Mwamba river. Here they are closer to the grasslands and away from the fast flowing currents of the main Luangwa . They ducked under the boat as we squeezed past on the way up to Mwamba Camp. 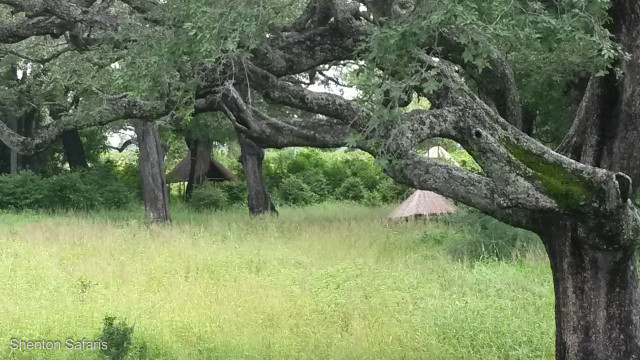 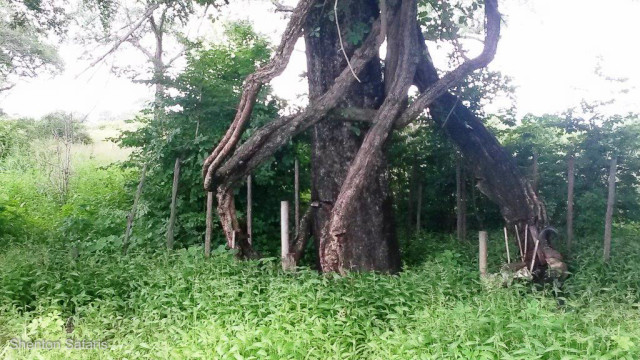 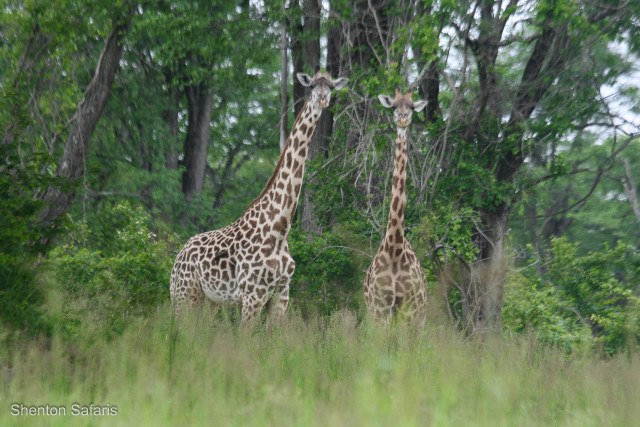 The following day we went up a small stream called the Chikoko and found a dead hippo being fed on by at least 50 crocodiles. Further up on the east bank of the river it is not actually National Park anymore and villages and people start to appear . It was an amazing sight to see a maize field planted right up to the river’s edge with hippo below looking up enviously at the ripe cobs – a human/animal conflict waiting to happen. 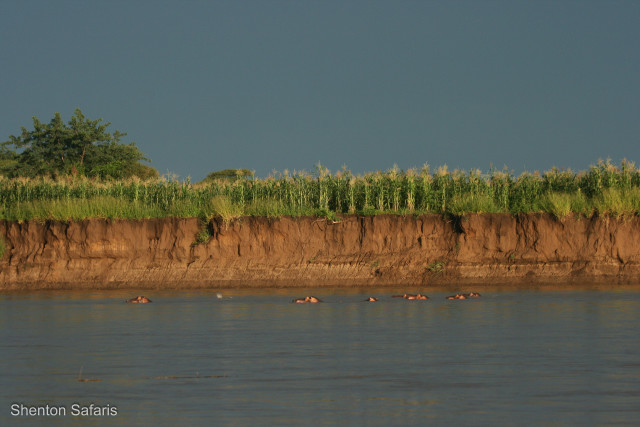 Village maize fields on the Luangwa 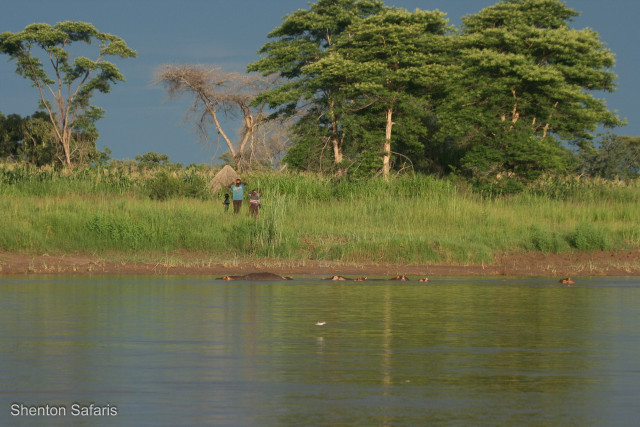 Village on the banks of the Luangwa 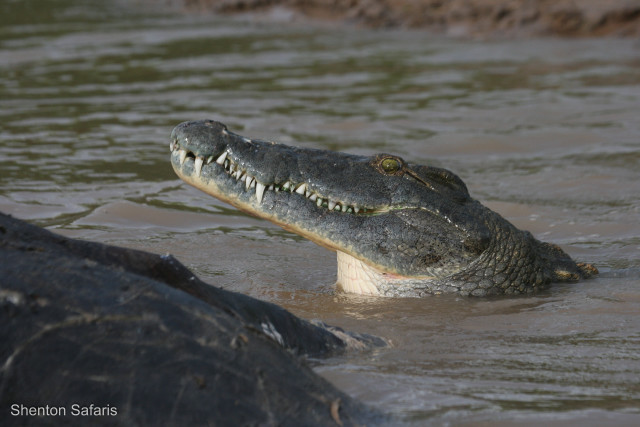 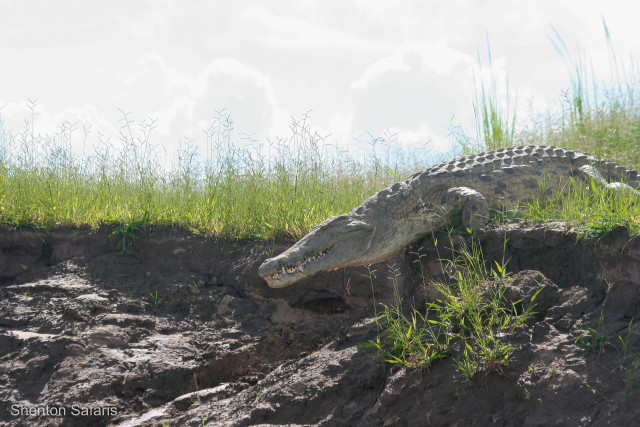 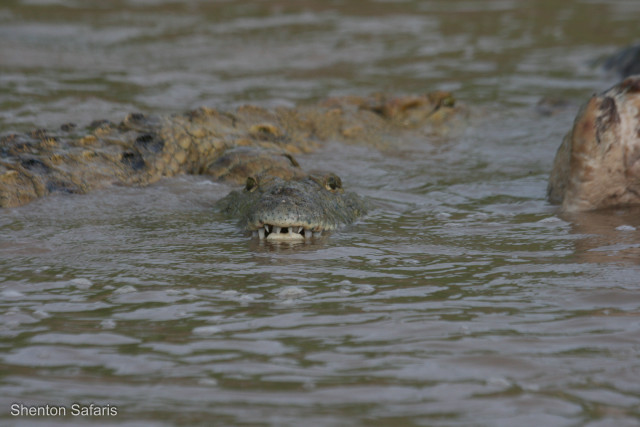 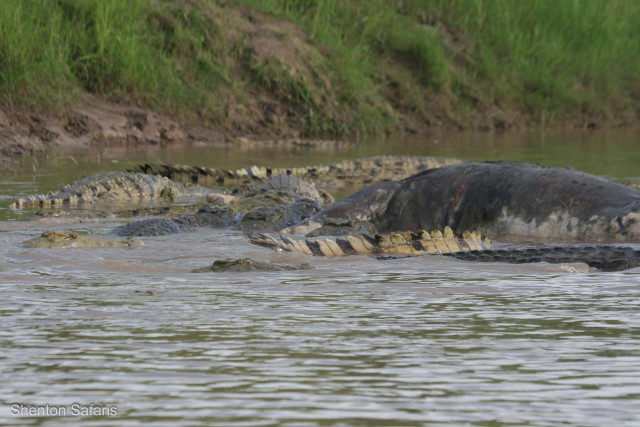 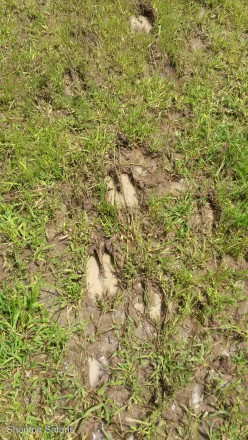 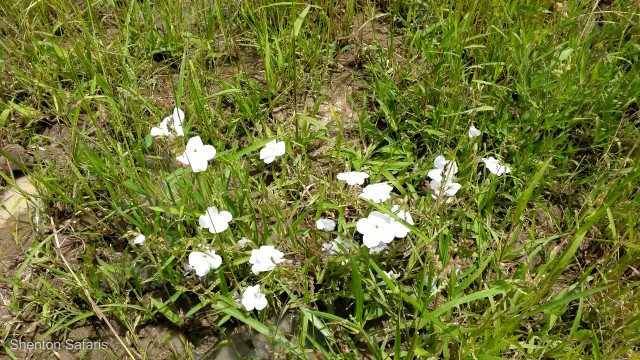 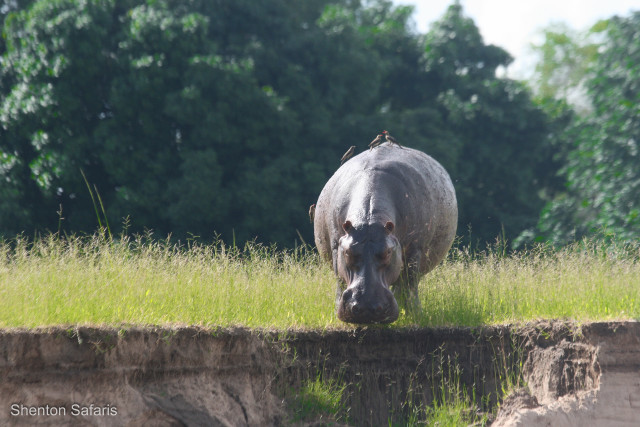 Hippo about to take the plunge

The natural light during the rainy season is even more vivid than in the dry season. Huge anvil cloud formations fill the sky and the strong sun reflects off anything wet creating an array of colours and shades, a special treat for anyone who visits the valley at this time of year. At night the storms break once again and the thunder rolls on and on. 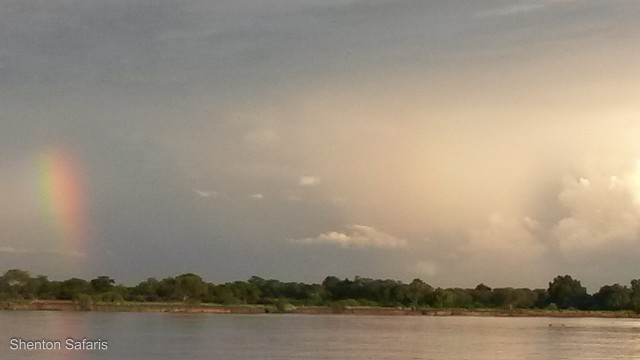 Rain Clouds over the Luangwa 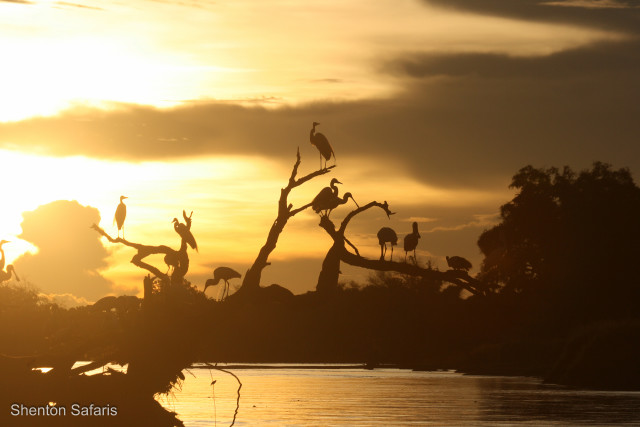 On our last day we floated past the Carmine bee-eater colony where we set the hide. The river bank had been washed clean and showed no evidence of the thousands of nests there from August to December. Inside the flooded ebony forest behind Kaingo Camp we drifted and became absorbed by the fairyland magic around us. Our access road to camp was no longer there – just hippo tracks and butterflies. 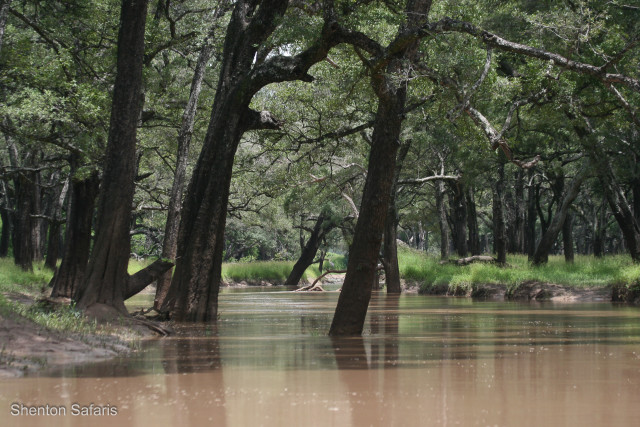 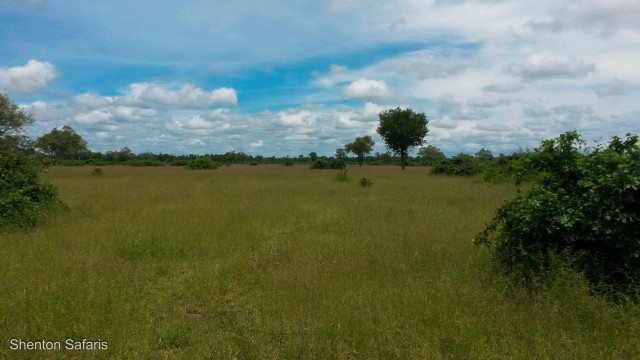 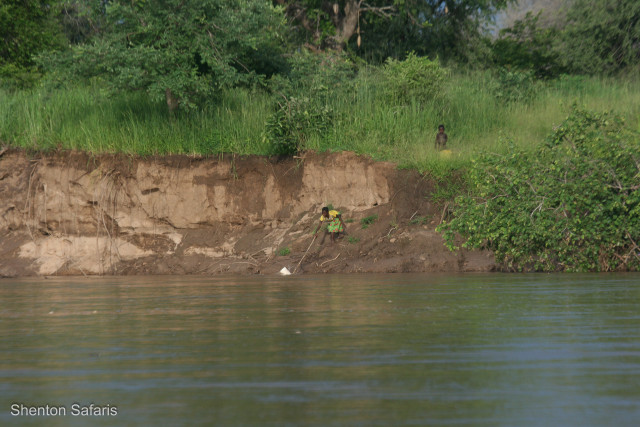 Time was gone but we will be going back in around the 25th of April after the last rain showers. This time we will enter the Park by road, cutting and grading our way up the 30 km from the Mfuwe Bridge to once again rebuild the camps as we have done for 23 years and have them ready for what looks to be another busy safari season.

Until then, “salani bwino” – stay well.

That is the main story for this edition of our newsletter. We will close up with the latest travel information and we look forward to seeing you soon for the upcoming safari season.

Matt & everyone at Shenton Safaris 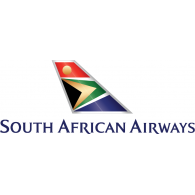 Zambia has also been given a Yellow Fever Free status by the World Health Organization (WHO) which is great news for everyone. Please click on the Link for further information 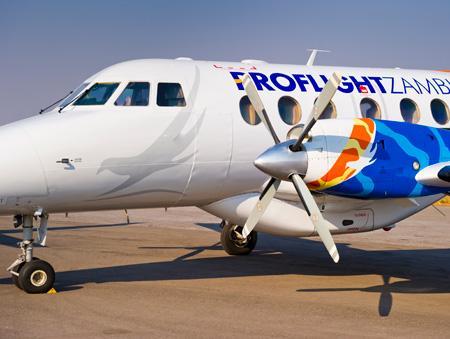 Proflight are delighted to announce an agreement with Rwandair that will see flights from Johannesburg to Lusaka commence from March 27th. Click on the link below to find out more.