They started out south, near Derek & Jules’ house, and slowly made their way north, along the bank of the Luangwa River. I first met Eleonore on my way back from staff lunch, as I was heading back to the office. Guided by Ian, the expert in walking-in-dangerous-animals-when-you-shouldn’t, we took a detour which took us away from Eleonore, to the bank of the river, in front of one of Kaingo’s chalets. Luckily, there was no guest in that chalet for us to disturb. Instead, there was Esmeralda. But she was 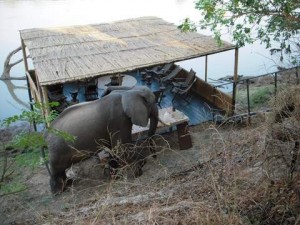 tranquil, foraging near the water. Knowing the family, Ian and I were on the lookout for Ed, who predictably had to be around somewhere nearby. And indeed he was, right by the office… He mocked us a little when he saw us, pretending to eat the driest skinniest bush around, which really didn’t look that appetizing, but which gave him an excuse to hang out in front of the office’s door. Ed eventually moved away to let us in. Being new to Shenton Safaris, this was my first encounter with the ellies  in camp. I have to admit I was relieved to have Ian, and ever so calm Patrick, with me in the office.  Thankfully those 3 frequent visitors are really chilled and they moved peacefully up along the river side, visiting chalet after chalet. Some of our guests had to move away from their private decks to take shelter in their rooms, rightly giving space to the pachyderms.

They were still in camp when the drum announced it was tea time. We all gathered on the river platform with Eleonore, Ed and Esmeralda only a few meters away, sipping water from the river. Eventually mother and daughter decided it was time for them to go, but teenager Ed wanted to leave a lasting impression to our guests. As a farewell, he came very close to our tea-serving table, where various teapots, tea bags, sugar jar and milk jug are resting on a nice printed tablecloth. As we were all watching expectantly, Ed turned his rear to the table… and yes, … added a nice pile of dung to the tea set up!! We all burst out in loud laughter, as Ed moved swiftly away, quite happy about his distinguished exit!

How do you like your tea? Sugar, cream, milk?  Elephant dung? Teatime will definitely have a new flavour now at Kaingo!