Gone fishing with a marabou stork

A striking sight a marabou stork is. Their long legs which bring their body to a height of roughly 60 inches, long beak and 12-foot wingspan makes the marabou stork not only a colossal bird but quite the sight. What’s more, the marabou stork possesses a balding head and an inflatable red pouch on their long neck. So, not only are they large but also, somewhat… ugly. Their balding head looks infected but there is a reason for this, marabou storks often eat from carcasses and in urban areas, rubbish tips, not the most hygienic state of affairs. Therefore, their bald head protects them from infections and blisters. 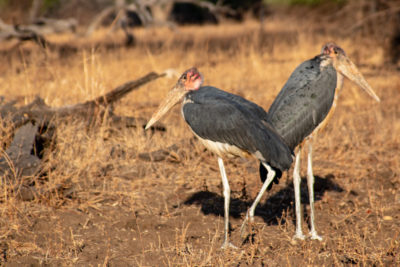 Syl and his guests watched on as a marabou stork fished in a small watering hole. The water perfectly mirroring its red neck pouch. This pouch connects to the storks left nostril and can reach 18 inches in length and is vital for attracting their mate. However, the aesthetics of the pouch is not what attracts their mate for life, rather the croaking noises the storks can produce from it. 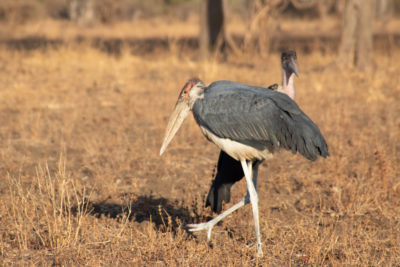 The guests and Sly watched the storks fishing, their technique looks somewhat clumsy, they quickly scan the water using their beak to detect their prey. The three of them really hoped for success for the stork, but the heavy-bodied bird didn’t make a catch in their presence. Rather, the stork moved away from the watering hole and socialised with a friend.