There’s a lot that makes a leopard loveable. They are the protagonist at Shenton Safaris, not just for their beauty and accomplished hunting- the enchanting leopard possesses so much more than this. Their shy demeanour and apparent decorum creates an instant sense of innocence surrounding these strong striking cats. The Panthera Pardus is intriguing and elusive. Their self-reliance and solitary nature play into the mystery that encompasses the leopard. 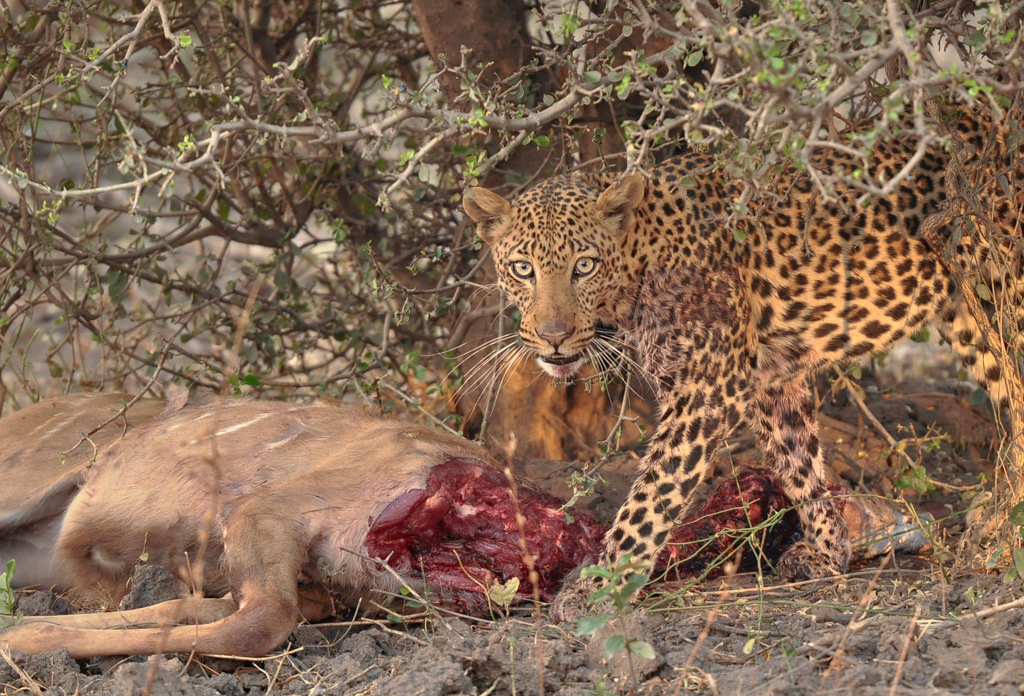 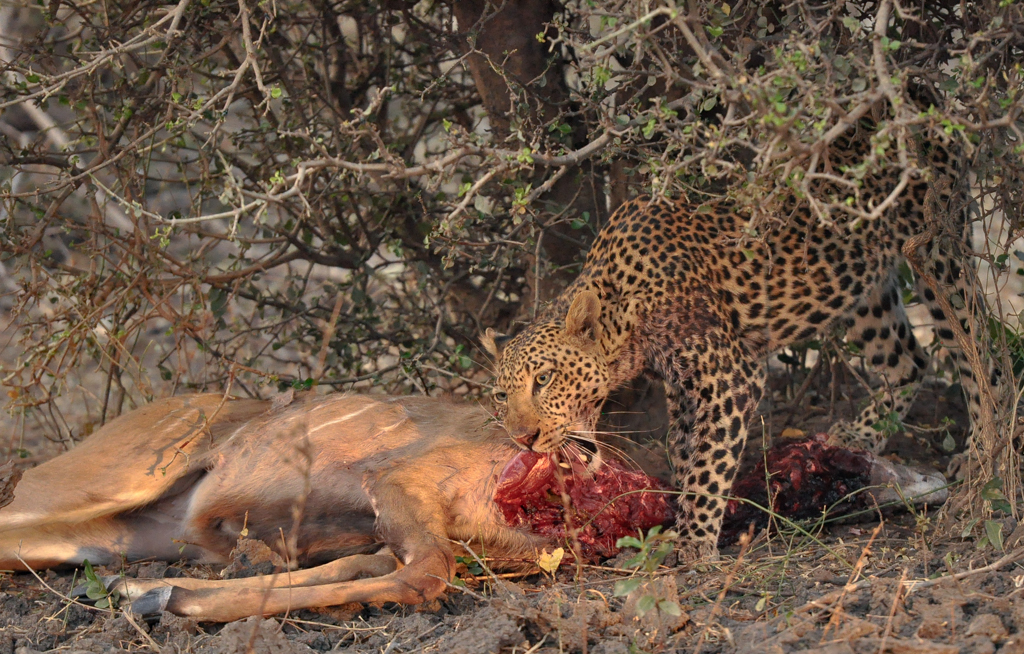 In June 2019, Hendrix witnessed Fundi, the 2 and half-year-old son of Mama Kaingo’s first hunt. A meagre banded mongoose, but, nevertheless a meal and an incredible achievement for the acutely timid leopard. Since this day, Shenton Safaris has watched Fundi go from strength to strength making accomplished kill after accomplished kill.

This day was no different. Clutched within his two-and-a-half-year-old jaws, hiding amongst the thickets, Fundi has his prize. A female kudu lays lifeless as the streamlined hunting machine eats from the antelopes bloodied neck. It is daytime and Fundi needs to work faster to ensure he keeps his kill. The leopard has to lighten the weight of Africa’s largest antelope on the exposed ground, then Fundi must embark on the arduous task of carrying it into the safety of the lower branches of a sausage tree. However, none other than natures scavengers have found their loot. 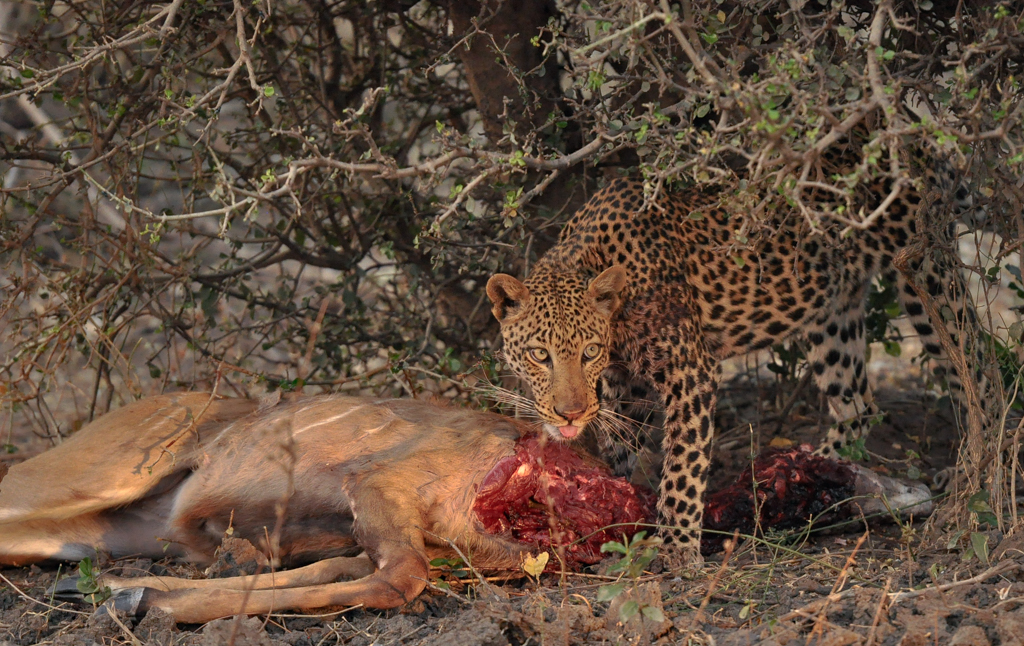 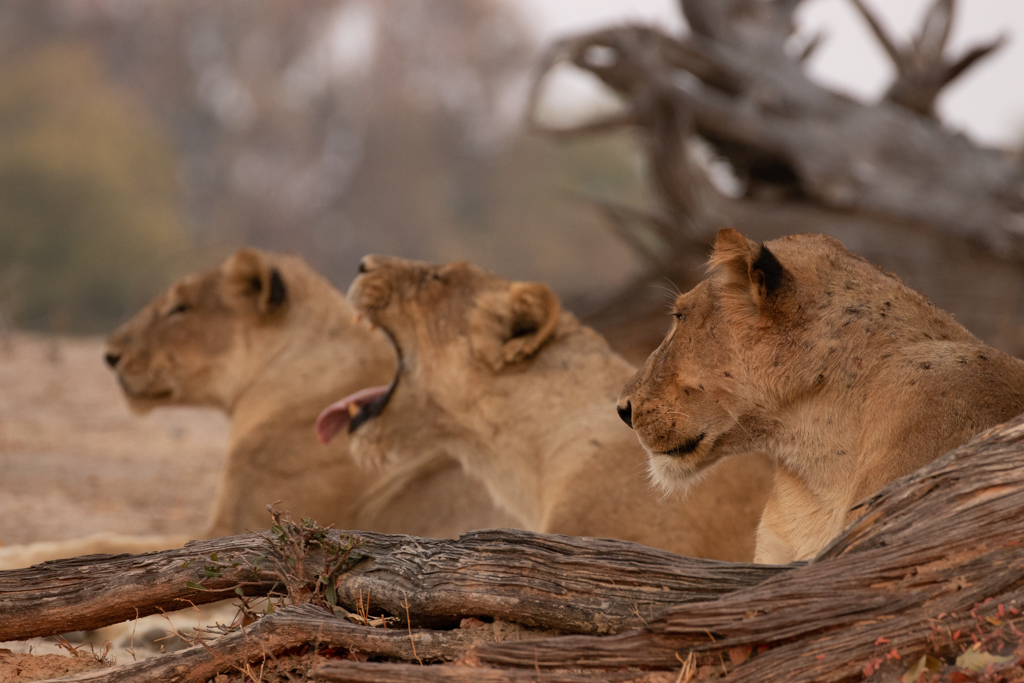 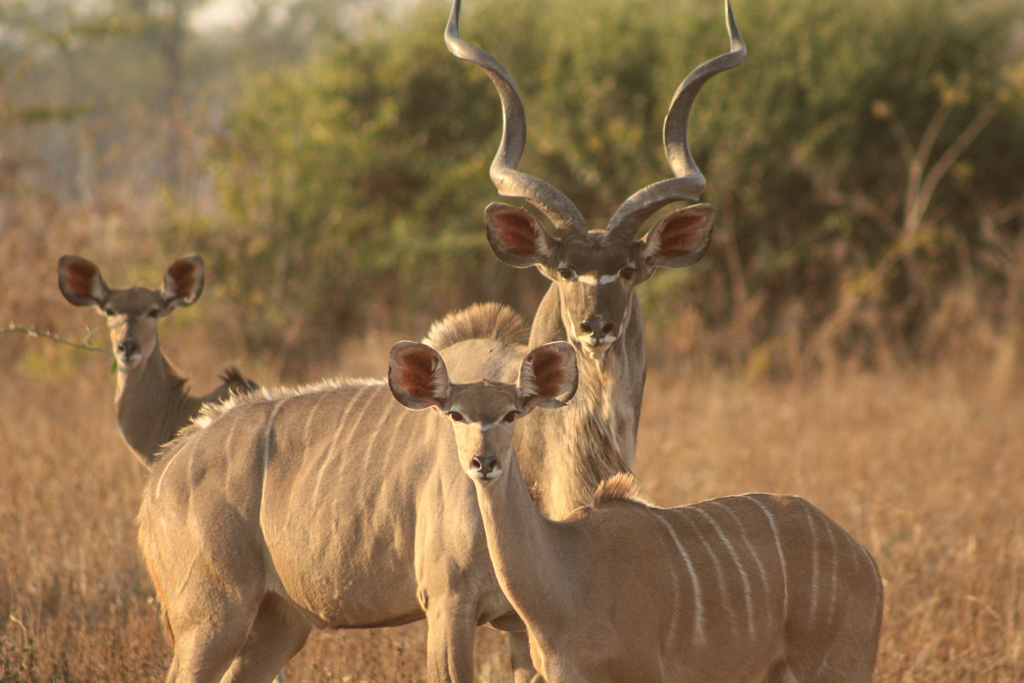 A quintessential orange African sun has dipped so fast below the horizon we have hardly had any time to take it in. It is nightfall and Fundi is in trouble. In one fell swoop, a clan of 8 hyenas have stolen the kill of Fundi and are demolishing the Kudu as quickly as they can. In between the high-pitched squeals of the hungry hyenas, bones crunch under the pressure of their strong jaws. As guides and guests watch this frenzied feed, the hyenas appear on edge and are eager to eat as much as they can. Their heads raise to attention a few times before they quickly return to the kudu. Just as the kill appears to be nothing but skin and bones, hyenas dash in every direction as a lone lioness charges in to claim the kill. Proving she is the strongest predator in African, she effortlessly gathers the kill and attempts to move it to safety from the clan of hyenas. In no time, the rest of her pride joins her. It is every lion for herself as limbs are torn off what’s left of the Kudu’s mutilated body.

As the lions once again have the last laugh, we reflect upon how the young leopard lost its hard-earned meal. It is a tragic moment of misfortune, but an important lesson for young Fundi. Although this will not be the last time Fundi bares suffering because of hyenas, we all have hope for the enchanting new boy on the block. Watch out Tyson and Mchenja Boy!

Want to learn more about the locations of our two camps- Kaingo and Mwamba? Follow this link for everything you need to know about our pocket in The Valley of the Leopard.