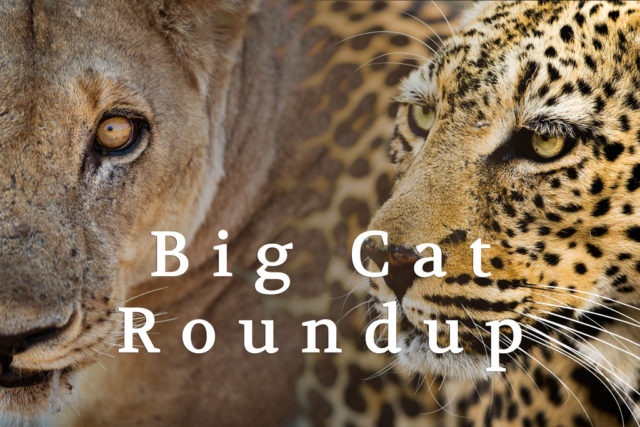 This last week has produced some incredible sightings. Join us weekly as we look back on all the big cat sightings our guests got to enjoy at Shenton Safaris. We will also include any sightings of the African wild dogs from the area.

The Mwamba-Kaingo Pride were found this afternoon very close to the Elephant Hide. They had been sleeping the whole day and now got up and started moving along to a nearby open area. There were some puku and impala around but luckily for them; they were not on the lion’s menu tonight. The 14 lions decided to take another rest, and that’s where we left them.

The leopardess, Chiphadzuwa, was found this morning sleeping next to a kill she made at the bottom end of Fish Eagle Lagoon. The impala carcass was 3 quarters eaten, and Chiphadzuwa seemed very happy with herself.

This morning we found the Mwamba-Kaingo Pride again. 11 members were all together, sleeping close to Shortcut Crossing. The all had full bellies, and it seems that they managed to hunt and eat something during the night.

Further down the road, we found another member of the pride mating with one of the Luwi Males. This is one of the first signs to show that the Mwamba-Kaingo is accepting the Luwi males as the new dominant male lions of the area.

This morning we found the same mating pair of lions from yesterday. They had moved slightly onto Lion Plains. There was no sign of the rest of the Mwamba-Kaingo Pride

We also saw two lionesses drinking water at the Hippo Hide this morning. We think these lionesses are from the Mwamba-Kaingo Pride.

The leopardess, Chiphadzuwa, was found this afternoon on Acacia River Drive sleeping in the shade of a bush next to the road. We stopped a distance away watching her when suddenly got up and made her way directly towards us. When she was very close, she climbed up a tree directly next to our car. Such a special sighting!

3 members of the Mwamba-Kaingo Pride were seen resting in the Kaingo Ebony grove. They seemed very relaxed, although no sign that they had fed recently.

Later that morning we also found the 4 Luwi males in the company of 2 Mwamba-Kaingo lionesses. It seems these males have forgotten about the Hollywood Pride for now and are putting all their focus into the largest pride of the area, the Mwamba-Kaingos.

In the afternoon we found an unknown male leopard wondering through the Kaingo Ebony Grove. He was walking along the river bank with a full belly and eventually climbed up a Sausage Tree where he decided to take a nap.

13 Lionesses of the Mwamba-Kaingo Pride were seen early this morning. They were all resting in the area of Longcut Crossing. Some looking well fed, while other still seemed hungry. Let’s see if they can have a successful hunt soon.

We started this morning by finding 3 members of the Hollywood Pride. They were close to Debs Tree, hunting a herd of zebra. In the end, unfortunately, they failed, and the zebra escaped.

During a morning walk, a leopard was seen in the area of Leopard Loop. The unknown male leopard had killed an impala, but within moments 8 hyenas descended on his location stealing the kill away and forcing the leopard to climb a tree.

On the same walk later that morning another leopard was seen. Close to Mwamba along the stream, we saw a leopardess jump out of a Sausage Tee and move away from the area we were walking in.

That afternoon we found 5 members of the Hollywood Pride close to Waterbuck Lagoon. They too were hunting zebra but unfortunately, the wind was not in their favour, and the zebra managed to escape.

During the night we went to the area of Zebra Loop, and there we found the Kapanda pride. 4 Lionesses were hunting waterbuck. They were successful and managed to kill a male waterbuck which they immediately began feeding on.

The day started with an incredible sighting. 8 Hollywood Pride lioness with the help of 4 nomadic male lions managed to kill a buffalo during the night in the area of Lion Shelf. In the morning 4 lionesses from the Kapanda Pride tried to join the kill. Immediately a huge fight broke out between all the lions. In the end, the Hollywood Pride and the nomadic males managed to chase away the intruding Kapanda females.  Later that night the lions were still in the same area sleeping under a Sausage Tree, no sign of the Kapanda Pride

The leopardess, Chiphadzuwa, and an unknown male were seen fighting at Shortcut Crossing. The fight was over a puku carcass, and in the end, the young male proved stronger and managed to get away with the kill leaving Chiphadzuwa empty-handed.

This morning we found 6 lions close to Longcut Crossing. Two Numbu Boys, 3 lionesses and 1 sub adult male from the Mwamba-Kaingo Pride. Their faces were all covered in blood, and they had full bellies showing they had recently eaten although there was no sign of a carcass nearby.

We found the male leopard, Golden Boy, this morning hunting in the area of Leopard Loop. He got extremely close to a small herd of impala, using a bush as cover. Just before he was ready to leap, a baboon started alarm calling which spooked the impala causing them to run away.

An unknown leopardess was seen this morning sleeping in a Sausage Tree close to Waterbuck Lagoon. This is our first time to see this leopard, and we will keep an eye out for her in the future.

That afternoon we found an unknown male leopard in the area of Acacia Loop. We followed him for a while before he made his ways down to the river for a drink. We think this could be the same leopard seen mating with Chiphadzuwa a few weeks back. Mwamba Bush Camp has written 68 post in this blog.