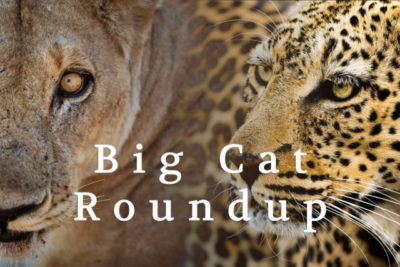 Fundi may still be young, but his exceptionally good looks make up for this lack of experience. Patrick is at Kamima Crossing, the sound of a commotion has brought him here. Hiding in the bushes is Fundi, he has been chased here by a troop of confident baboons, and show’s no sign of standing up to the troublesome troop.

We find the young male leopard again. However, this time, Fundi has redeemed himself. His mouth neatly bloodied, he feeds on his kill- a small puku but perfect for the son of Mama Kaingo.

Yesterday we watched Fundi feeding on his kill after he had a tough day with a troop of baboons. Luck does not seem to be on this leopards side because we returned to the elephant hide where we found him yesterday to spot the fearsome M-K Pride. It is important to understand that the M-K’s govern the areas that surround our camps, so instantly, we knew Fundi’s kill was lost. We can only hope he had eaten enough for the lions came in to claim that they believe is theirs.

All the while, oblivious to the trials and tribulations her son undergoes, Mama Kaingo is spotted sleeping peacefully in a natal mahogany tree.

Today was an eventful day in the bush, keep an eye out for tomorrow’s blog to find out what happened as the sun started to dip below the horizon.

The M-k’s are at it again, and a hippo calf, nor its mother are no match for the pride of lions. After feeding on the calf, the pride of lions appear to boast by lying on a sand-bank of the Luangwa River, flashing their bloating beige stomachs, legs in the air, breathing uncontrollably in the heat. They are a pride that eats well.

It seems like it has been a while since we have spent time with one of our favourite leopards. Chiphadzuwa is spotted in a rain tree, with her lays a lifeless impala, he favourite type of kill.

A large herd of beautiful wildebeest makes their daily migration to drink from the meandering Luangwa River. As the hippos honk and the fish eagles sing, the M-K pride lie under the dappled shade of a sausage tree. Eight lions make up the M-K’s today, and it is not long until they discover the thirsty wildebeest. The lions assume their position, each finding their place in their mission to hunt.  They stalk the wildebeest as they approach the water’s edge. The lions creep ever closer; the stalk seems to take a lifetime until all is lost and the wildebeest escape to live another day. 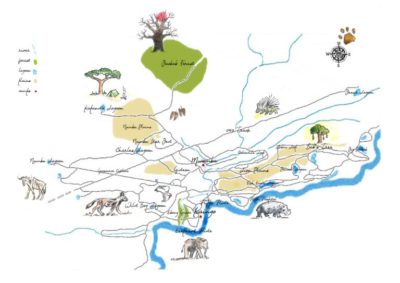