A buffalo is the ultimate kill for a pride of lions. These gigantic beasts are hard to take down, they weigh approximately 300 to 835 kilograms contrary to the 130 kilograms of a female lion. The possess two terrifyingly sharp horns and an equally terrifying temper. The buffalo will fight to the bitter end. 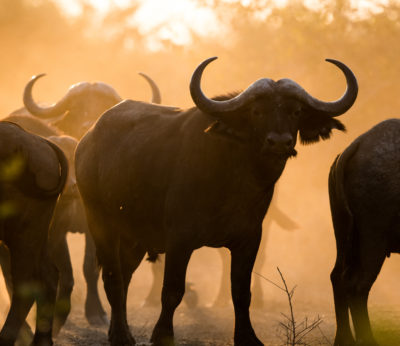 Andrew and his guests are on the scene. In front of them lays a sight hard to stomach. However, aspects of what they are watching completely juxtaposes one another. A perished buffalo lays mainly intact. Although, its eyes have rolled back and the coarse fur on its face has been ripped away exposing the beasts bloodied jaw and the white of its bottom set of teeth. You would expect to see a pride of lions tucking into their prize. However, the sight in front of Andrew and his guests are far from this. Two cubs lay at the stomach of the buffalo, in between them, white butterflies dance and fly while one cub tries, but fails to extract what it can from the kill. In a true childlike nature, the cub gets bored and this results in play fighting with its sibling. A scene of beauty amongst death, but one that will not last long.

Did you know that we have a beautiful bush camp- Mwamba? Located inland from the Luangwa River, Mwamba offers a different experience of game viewing than that of Kaingo. Learn more by following this link!