One particular evening, our guests arrived back from the drive to find our baboon troop in the trees, above the chalets (much to the displeasure of Henry, our room attendant, due to the mess they can make). 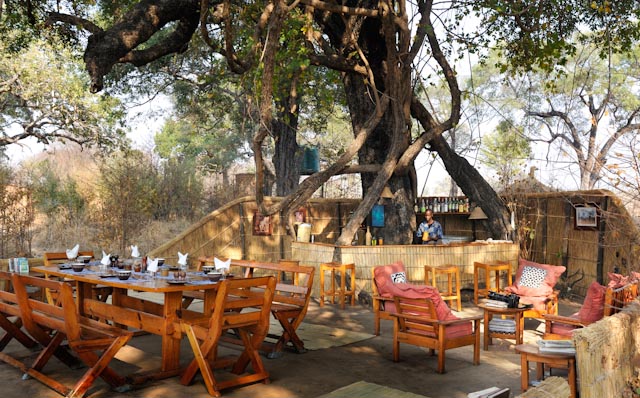 John in the Chitenje, at Mwamba

They were calling in alarm but no matter how often we looked around the camp grounds, we couldn’t find whatever it was that was distressing them. We ate dinner with the baboon chorus in the background.

Until Meyam shone his torch up in to the trees again… caught in the beam was a leopard! No wonder the baboons had been a trifle disturbed.

While we were standing on the pathway watching the leopard, a baboon dropped out of the tree with a loud thud and ran towards us at full speed, passed us, and into the distance…We were obviously less threatening than the leopard! John, our waiter, laughed about the vision of the baboon dashing past us for days.

A few days later, just before afternoon tea, John the waiter called me. He was standing at the entrance to the kitchen. Swiveling his eyes towards the chitenje (dining area), he said: “have you seen?” Inside the chitenje was either Tom or Jerry (our regular elephant visitors) inspecting the range of wines on display.

He spent a couple of minutes deciding whether it would be a good idea to sample a couple but then maybe thought it was a bit early in the day. He then slowly ambled towards the “door” towards the chalets and just as he reached it, spread his back legs, and blessed the chitenje. Doubly. And then slowly wandered out.

He was obviously not impressed with our wines… John was so angry but ended with “just like a human, did you see? He spread his legs so his feet didn’t get dirty! Imagine”

Till later for more tales from the bushcamp