A kill on the banks of the Luangwa River

he final few months of the season in the valley are always action-packed. The Luangwa River has depleted exposing its silty river bed, and more and more animals occupy these sandy banks as all the waterholes inland have become so dry it’s hard to believe they ever offered life. 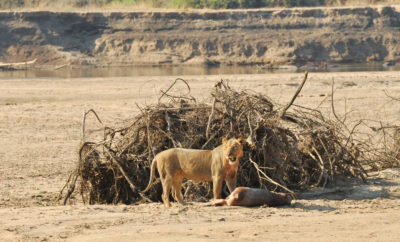 The wet humps of hippos backs glisten against the mid-morning sun while crocodiles lay on the banks, jaws open absorbing energy from the morning light. Patrick and his guests are quickly drawn to the mass of crocodiles, quickly making their way back into the water from sandy banks. As a collective, the crocodiles had clearly had the same intentions before returning to the safety of the water. This bizarre behaviour indicated to Patrick that there was more to be seen from the scene that initially appeared tranquil. They scan the beach until they spot a sub-adult male lion with a hippo calf. The dead calf is the lion’s prize, and the group wonder amongst themselves as to whether the lion made the kill in the shallows of the meandering Luangwa River. The group may never know, but they are certain the dozens of crocodiles had attempted to claim the calf of their own kill. The victorious lion was wet, injured and exhausted. Protected by debris left on the sand from when the river once flowed higher, the lion rested with his kill before tackling the task of taking the calf into the shade for safer feeding. One hundred metres of scorching sand, hot valley air and the now mid-day sun beating down on the lions back were all that separated him from shade provided by acacia and ana trees. The task appeared mammoth as the young male stopped to rest and adjust positions before dragging the calf a further few metres up the beach. Once in the shade, the lion feasts the day away. A fantastic feat and a fantastic sighting for Patrick and his group. 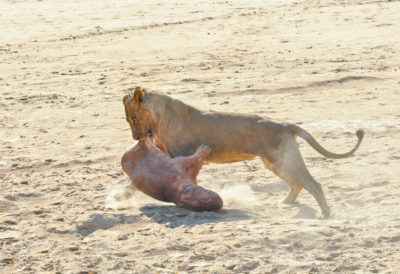 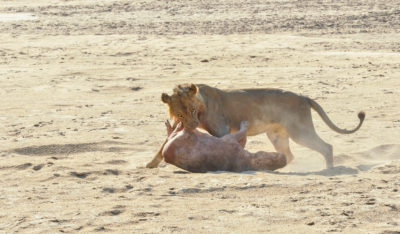 Have you visited our Instagram page? Give us follow @shentonsafaris for your daily dose of beautiful wildlife!